North Atlantic Road Trip 2017 – The journey of a lifetime!

Just a few short weeks into starting his new role as Twisted Automotive’s new Marketing Co-ordinator, James Ayre was invited to take part in the North Atlantic Road Trip, a five-day drive from Copenhagen, Denmark, to Stockholm in Sweden, taking in some incredible scenery on the way.

We caught up with James upon his return to the office to gain an insight into what he got up to, behind the wheel of the new Classic Twisted Build No. 6 – a Black 110 Utility.

“Firstly, the guys at Team 68, who organised the trip, did an amazing job! Everything ran smoothly and I think I speak on behalf of all involved in saying the trip was an unbelievable experience. Team 68 are a group who have previously entered numerous Gumball rallies, and it was that event which provided the inspiration behind the Atlantic Road Trip.

“From a Twisted point of view, it really was a privilege to get the opportunity to join the group, in what was an absolutely incredible five-day trip! Twisted were invited to not only supply a people carrying vehicle but also to offer something different to every super car under the sun.

“On my way to the start line, I drove from Thirsk, where we are based, down to Dover, where I spent the evening before catching an early morning ferry to Dunkirk.

“From Dunkirk, I ventured through France, Belgium, cutting through southern Holland, then heading towards Hamburg before reaching near enough the most northerly point of Germany.

“From there I took the 50-minute long ferry from Puttgarten, Germany, into Denmark, crossing the Baltic Sea which for a first timer, was pretty impressive. Once docked, it was a 1 1/2 hour scenic drive to Copenhagen, where others taking part in the trip were awaiting.

“A starting grid had been arranged in a Copenhagen Square, where some 25 cars were positioned ready for Tuesday mornings’ launch. To name a few, a Lamborghini Diablo, an Aston Martin Vanquish, A Ferrari GTC4 Lusso, a BAC Mono and at the forefront of the grid (only because I was the last to arrive) was the Classic Twisted! So I was driving with some pretty special company! 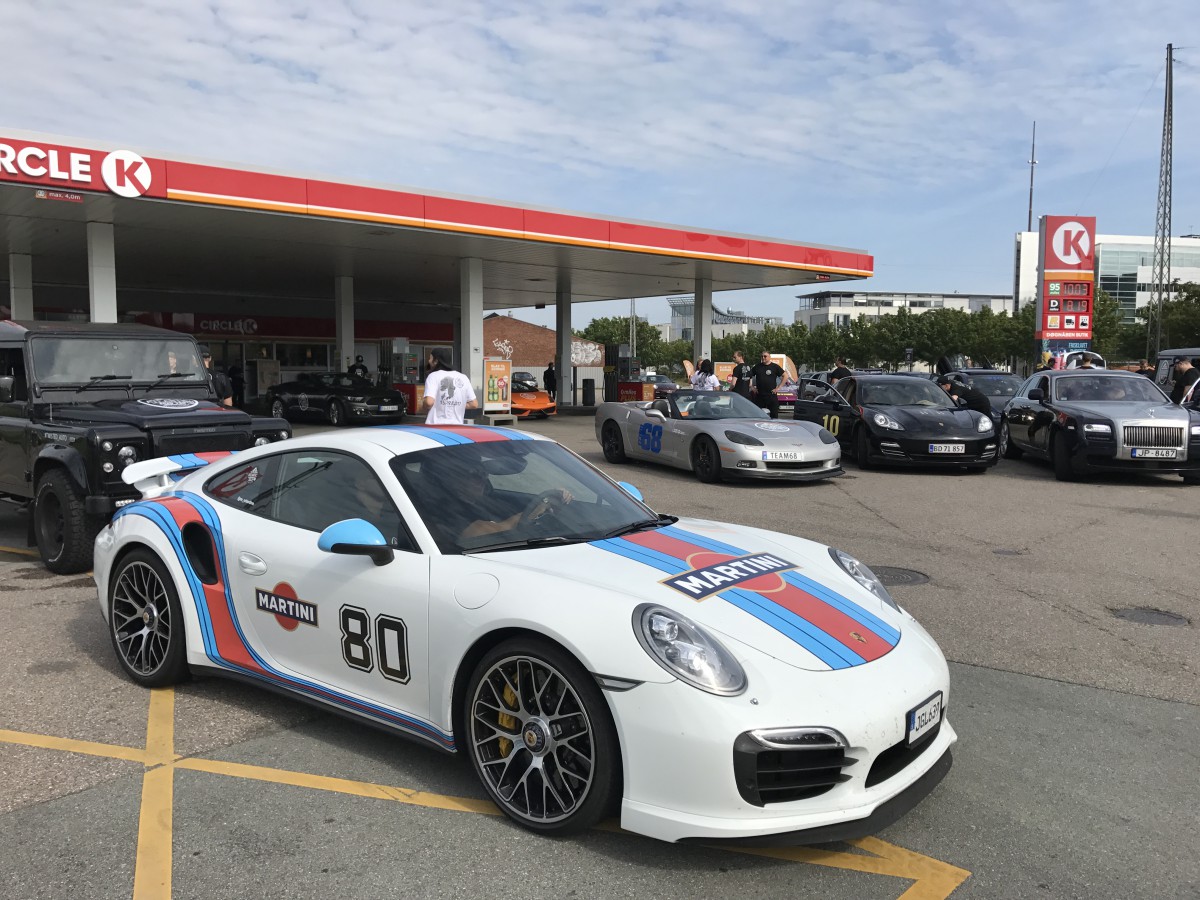 “Tuesday came in cold but sunny Copenhagen and in convoy we set off for Sweden. After the group emptied a petrol station’s weekly supply of fuel, the route took us over the Oresundsmotorvejen bridge which sits half above water, half below – a serious road to drive!  Sweeping around the bottom of Malmo we then headed North towards Gothenburg.

“Hugging the West coast of Sweden, we crossed the border into Norway and caught the ferry from Moss, a small town south of Oslo. After the ferry, our first stop was our evening base, in Larvik as dinner completed the 10-hour driving day. The talk amongst the locals was that day two was to be the most spectacular…

“8am start and the day didn’t disappoint.

“We travelled from Larvik to Lysebotn, which to reach, required a steep mountainous descent. The Defender’s progressive suspension which in my view, is the most valuable addition to the classic range, was to thank as the 110 handled brilliantly in trying to keep up with the Lamborghini and Porsche up ahead. At this point in particular, I would have welcomed a set of Twisted by Alcon brakes as the hairpin bends really tested the 110’s capabilities! 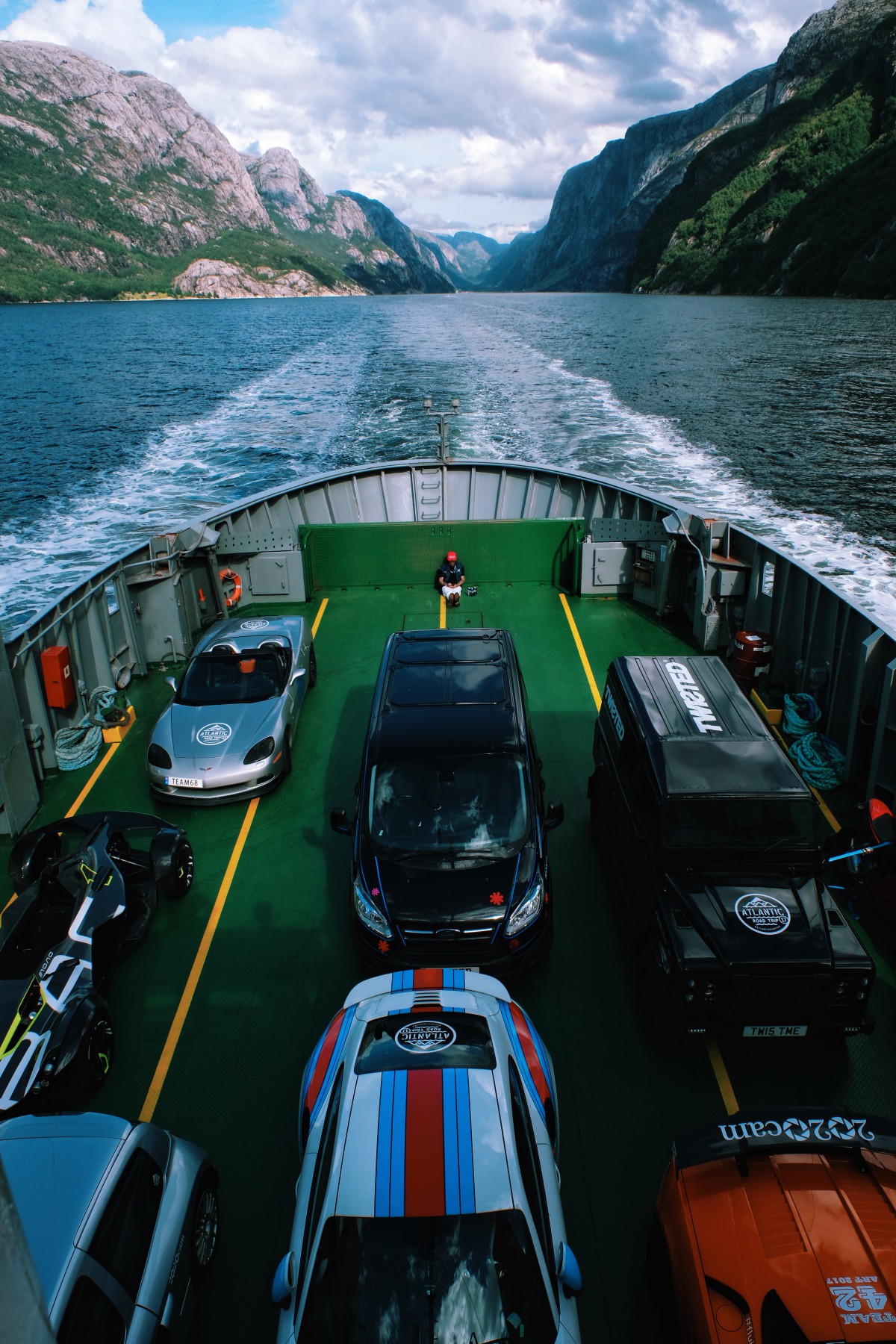 “After reaching Lysbotn, we boarded the Lysebotn Fjord ferry, where I was able to witness arguably the most impressive landscape I’ve ever seen. It genuinely was breath-taking as the 2-hour boat trip takes you out of the fjord with almost vertical sides boasting the most powerful colours!

“Part two of day two saw the group head to Rosendal, a (yet another) scenic town, situated clinging to the side of kvinnheradsfjorden – which is not easy to put into the sat nav while you’re driving. Trying to keep around 25 vehicles in convoy throughout the trip proved difficult as some were keen to cover the ground and others were more interested in the passing views. 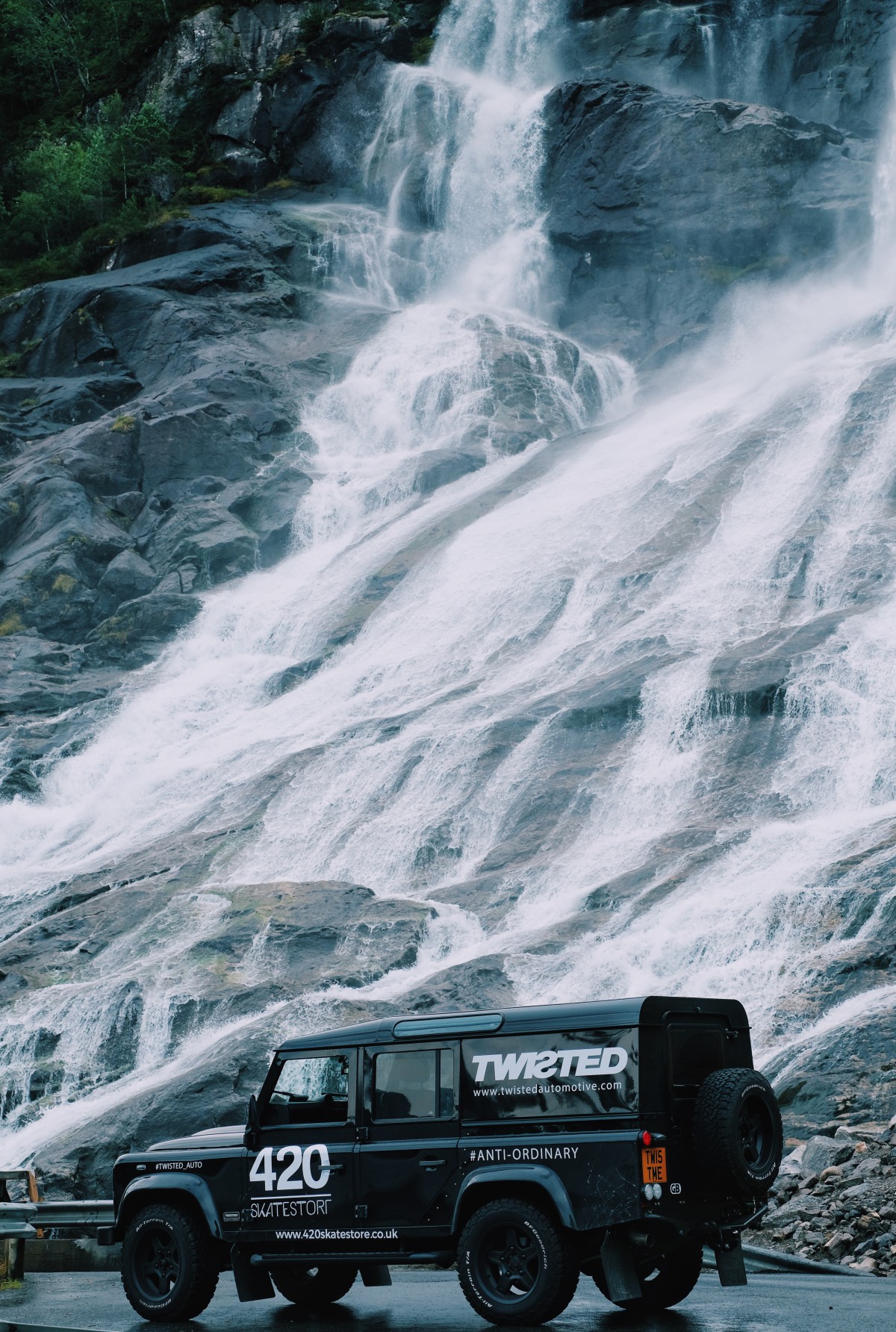 “As we passed through villages full of photographers and Atlantic Road Trip Fans, the Twisted Defender was undoubtedly one of the most eye-catching vehicles involved.

“Day three took us through Voss, a Norwegian Ski resort, and up towards the breath-taking Josterdal glacier where we were greeted by a herd of cows presenting a great photo opportunity (see below). 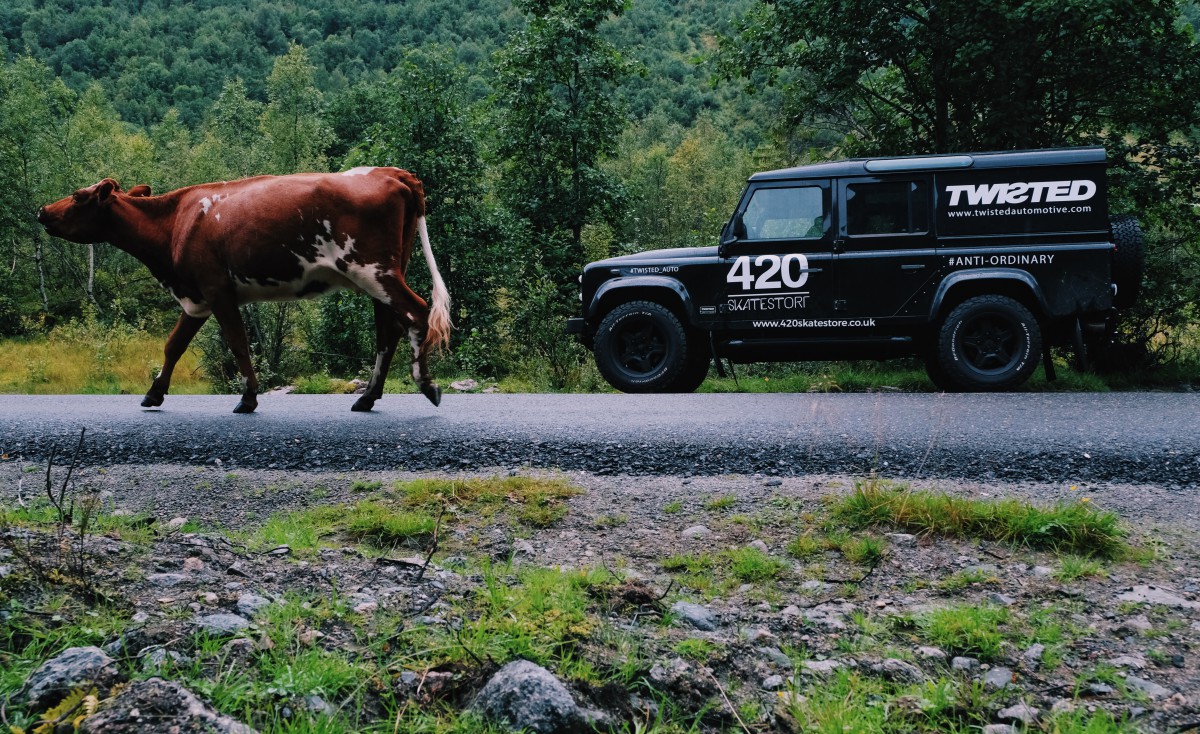 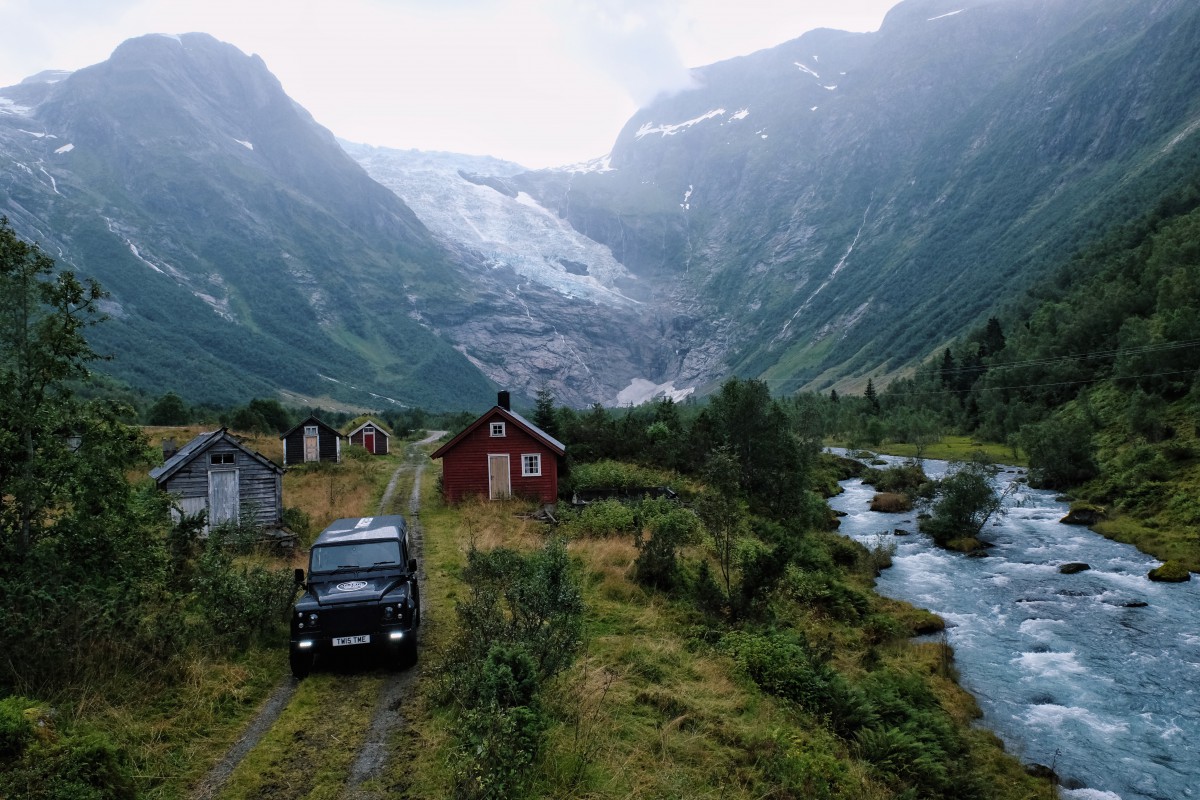 “Several ferries later, the convoy entered the Laerdal tunnel, which bizarrely contains lay-bys, roundabouts and is lit up with aluminous blue lights. A rather rare sight – nothing like I have ever seen before. I couldn’t believe the amount of investment the Norwegian government have put into infrastructure even in such remote locations. The long 15-hour day came to an end in a pitch-black setting of Valldal, North Eastern Norway.

“Day four took us from Valldal over the mountains to the famous Trollstigen road. Pausing at the viewing platform you get a real sense of the indescribable road you’re about to drive on. Full concentration is required as the sheer steepness and twists make the next four miles perilously slow – especially when you are constantly looking for the most impressive pictures possible – of which we managed to get! The day continued towards Molde, then to Vevang, where the world-famous Atlantic Road begins. 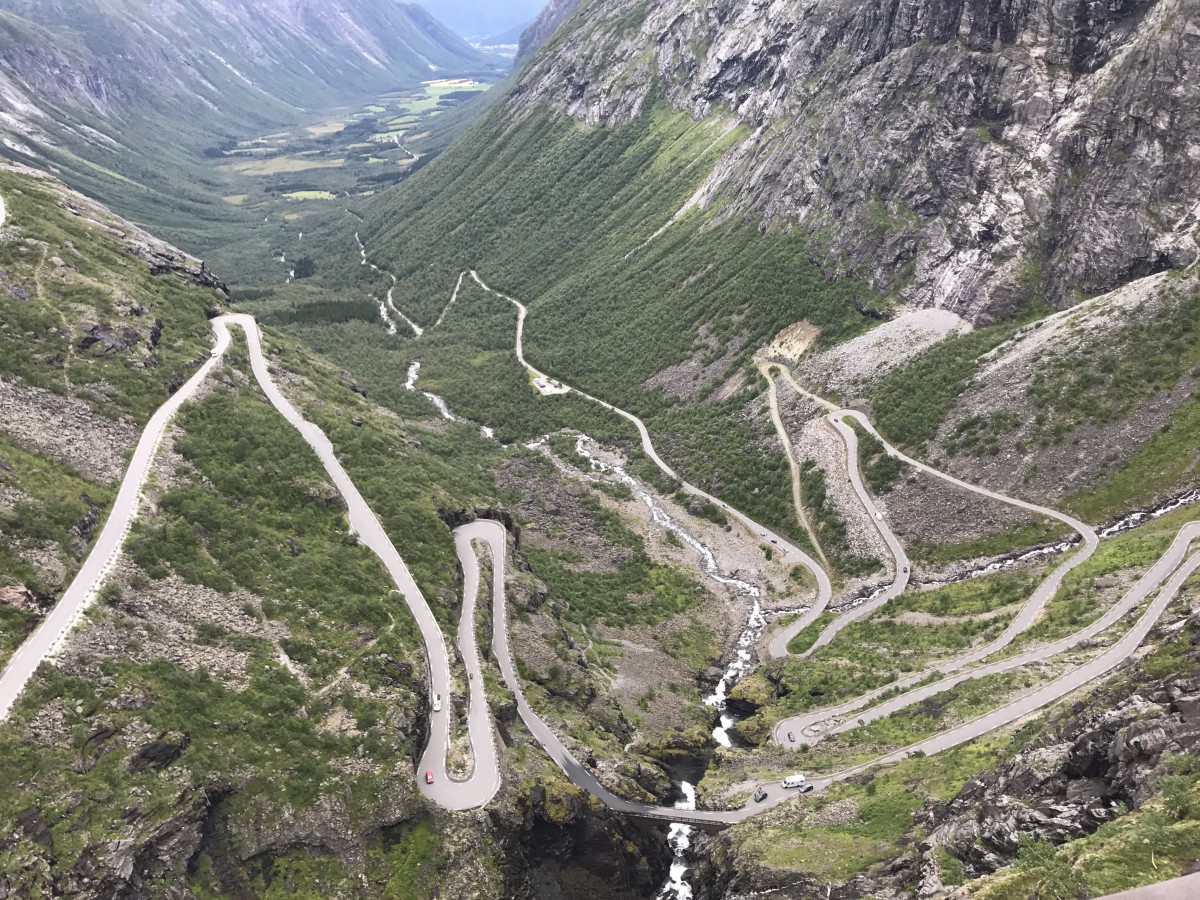 “The pictures do not do it justice. The way it has been constructed is mind-blowing and even driving over it five times just to capture the perfect picture was not enough. A supercar car park was the designated meeting point, which brought everyone together to drive over in convoy – and that certainly brought the crowds. Crossing the bridge for the final time, with three drones flying, was a moment to remember, the exhaust noises, the atmosphere and the realisation of exactly what we were doing! 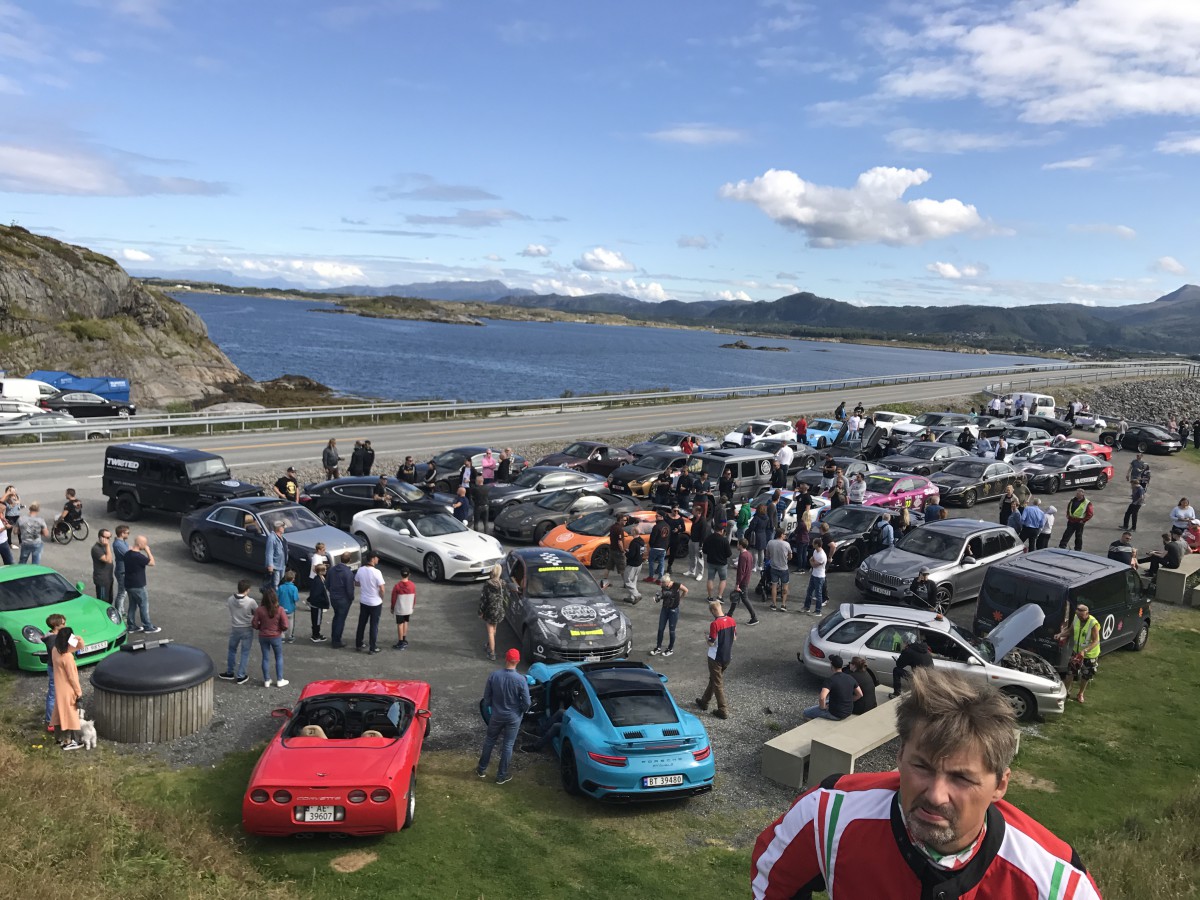 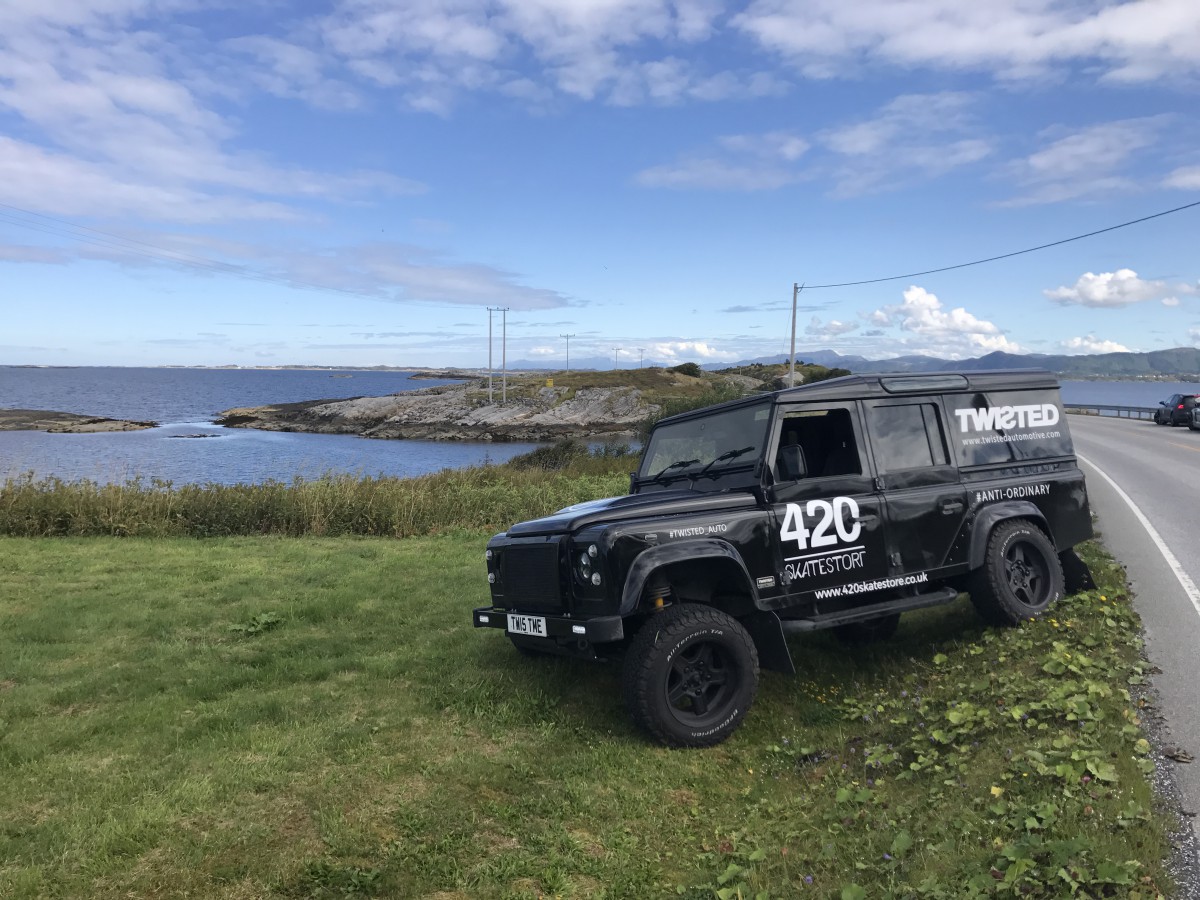 “It was then up to Kristiansand, followed by a long trip down the E39 towards Trondheim, stopping in a small town called Klett. Here, Team 68 had arranged for people across the country to meet with their own supercars, who then joined the final convoy – of around 50 vehicles – down the 707 road into Trondheim.

“As we arrived in Trondheim the Brattora ferry port was the meeting place, where thousands of fans, journalists and local photographers had congregated awaiting our arrival. Flares were set off and the atmosphere was brilliant as music played in the Trondheim evening sunshine, the third largest city in Norway which sits on the outskirts of the Arctic circle. It was here that I was lucky enough to chat to a few Scandinavian Twisted enthusiasts who were eager to see exactly how the chaps back in Yorkshire had engineered the Classic Twisted. 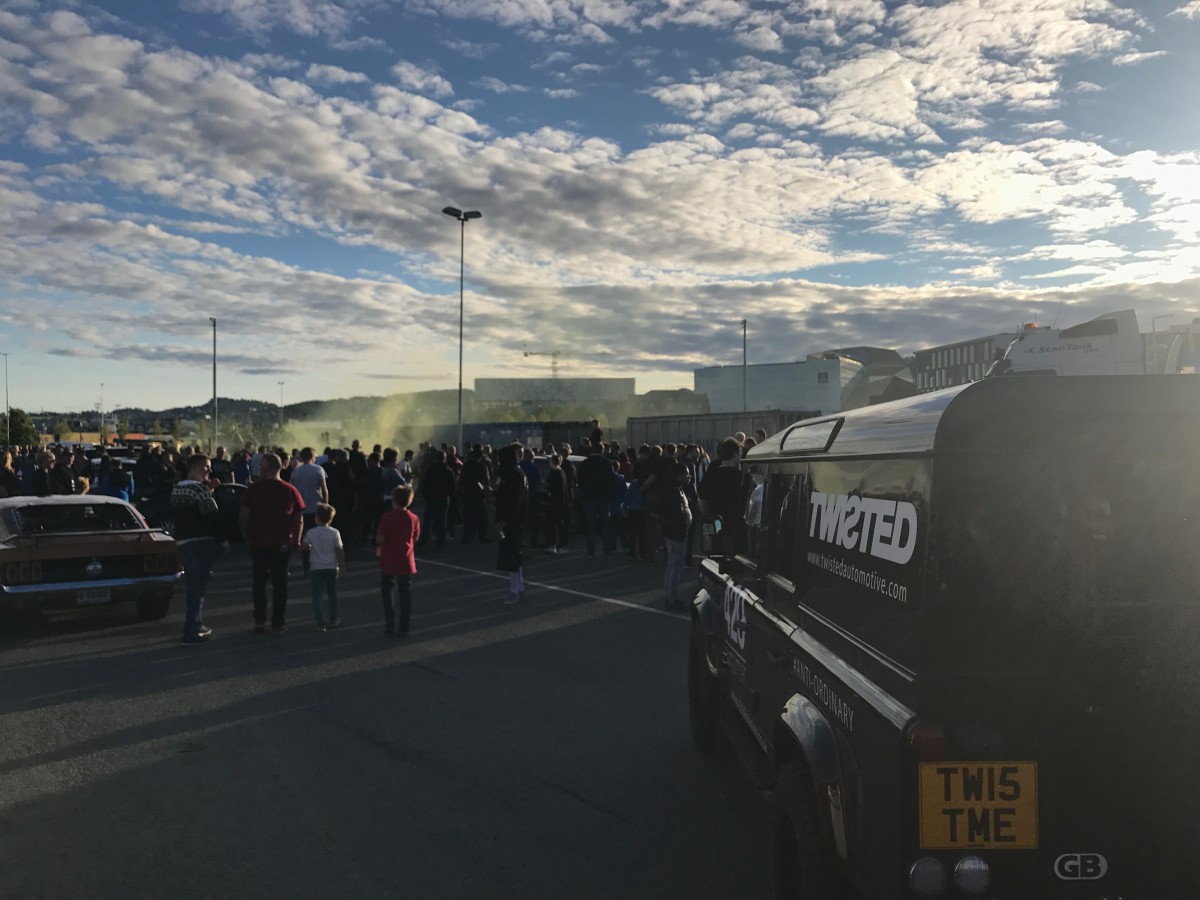 “The journey came to an end in Stockholm as the group cut across Sweden on the final day, finishing with a celebratory party in a local restaurant.

“2,900 miles later, the Defender had coped with ease, rivalling the Diablo and the Mono as the biggest head-turner managing to keep up with anything and everything with more power. Witnessing some immense scenery, and driving on some equally incredible roads, it was truly a once-in-a-lifetime experience and a great opportunity for Twisted to be associated amongst such a vast range of supercars”.

“A huge thank you must be given to Arne Johansen at Team 68 for organising the event. We certainly hope to see everyone next year for ART ’18!”

Sean Conway and Colonel Mustard take on The Highlands

Customer Car : In for a pit stop