Little Kate may not be present but we meet Pip, Molly, Java, Billy & Boris (...and Charles too).

HOW DID YOU FIRST HEAR ABOUT TWISTED AUTOMOTIVE?

I first heard about Twisted back in 2011 at a local car show. I was there as a part of the VXR club as I had a Corsa VXR at the time, it was a phenomenal car. It was white and it had over 200bhp, it was a fantastic toy. My family have always loved their cars, my dad used to have M3’s and RS4’s and my mum either had Defenders or Range Rovers.

I was at the car show with my mum, and in amongst all these cool cars, there sat one Defender, it was a White 90 TDCI and it turned out to be a Twisted. At the time it was owned by a gentlemen called Nigel and we are friends even today.

When I met Charles, he introduced me to Nigel and that’s where the penny dropped really. It just shows how small the Defender world really is. I fell in love with his White 90 instantly, he had gone above and beyond what Twisted normally do.

Some might say it was over the top, but for him it was perfect, a real extension of his character.

HOW LONG HAVE YOU BEEN OF A FAN OF THE DEFENDER AND WHAT DO YOU LIKE MOST ABOUT IT?
I have grown up around Defenders since a young age actually. My father bought my mum her first Land Rover, a 90.
Even now, he still complains at how much petrol that thing used! He used to buy her one every 2 years, it was such a cool car. My sister, my mum, the dog and I all used to ride in it to school. We used to go and pick my friends up and they’d sit in the back, I mean there weren’t any seats but it didn’t matter back then you’d just jump in and off you go.

One of the best I remember was a TD5 90 which dad added a snorkel, steering guard and BF Goodrich tyres to. Since then, the first thing we did whenever we got a new one was to go and get BF Goodrich tyres fitted, and that’s exactly what I have on mine now!

What I like best about the Defender: it doesn’t matter who you are, or where you are, you can always turn up in a Defender. 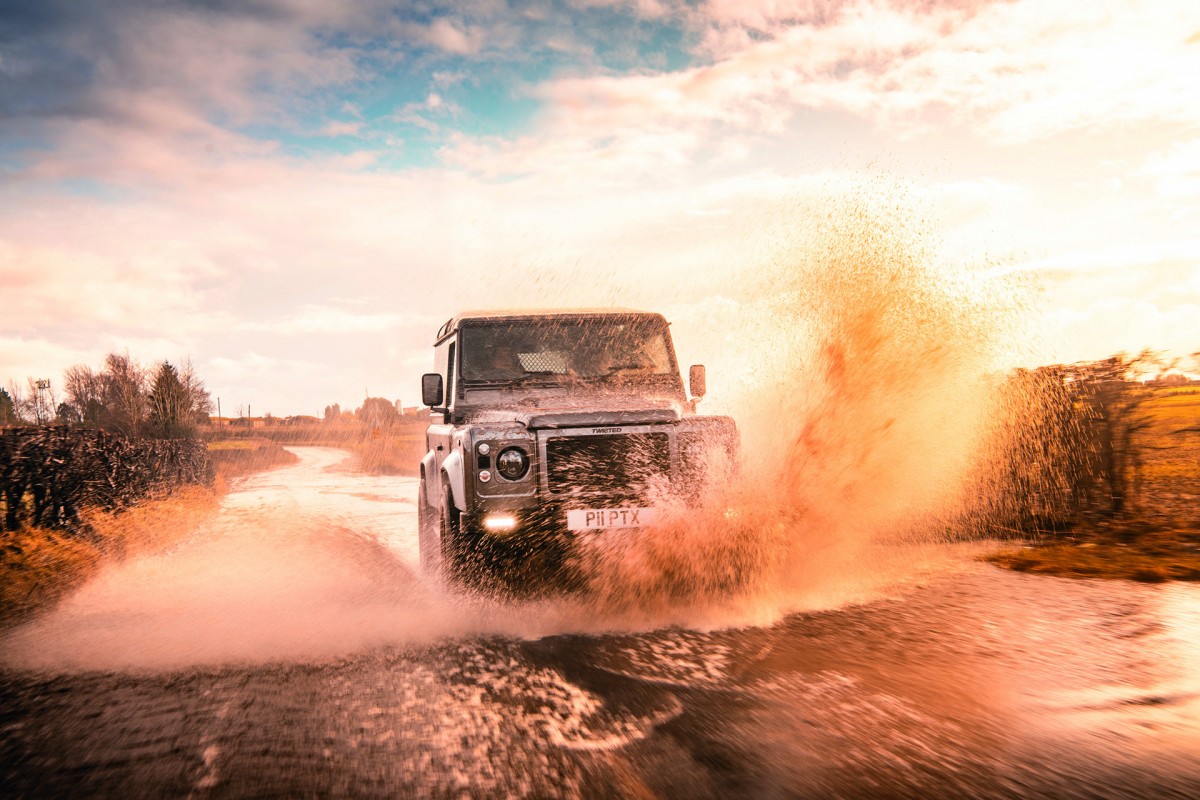 For Pip, the love of the Defender started many years ago. Fast forward 10 years, she now drives a Twisted 90 as an everyday vehicle, ferrying kids and dogs across Yorkshire. We caught up with Pip, the future wife of Twisted founder Charles Fawcett, his daughter, Molly Fawcett and the three four-legged musketeers, Java, Billy and Boris!

WHAT CHANGES DO YOU FEEL ARE MOST NECESSARY TO MAKE TO THE ORIGINAL DEFENDER, AS PART OF THE TWISTED BUILD PROCESS?

Standard Defenders on the road bounce around and are quite uncomfortable and unforgiving. I think looking at mine, if there was anything I wouldn’t want to lose, it would be the suspension.

Charles should in fact change the name of it from progressive to predictable, because the one thing a standard Defender isn’t is predictable.

Closely followed by the wheel and tyre combination and the power upgrade, those things really make it drive well.

Yes the soundproofing certainly helps and yes the turning circle is improved and it doesn’t leak like an old one because all the panels are lined up.

WHAT IS IT THAT MAKES YOUR VEHICLE STAND OUT FROM THE REST?

What makes it stand out really is that there is a woman driving it! When my mum drove hers when I was a baby, it must have been strange back then. Because even now people double take. Other than that I guess the Golden Retriever sat on the passenger seat gets some looks. 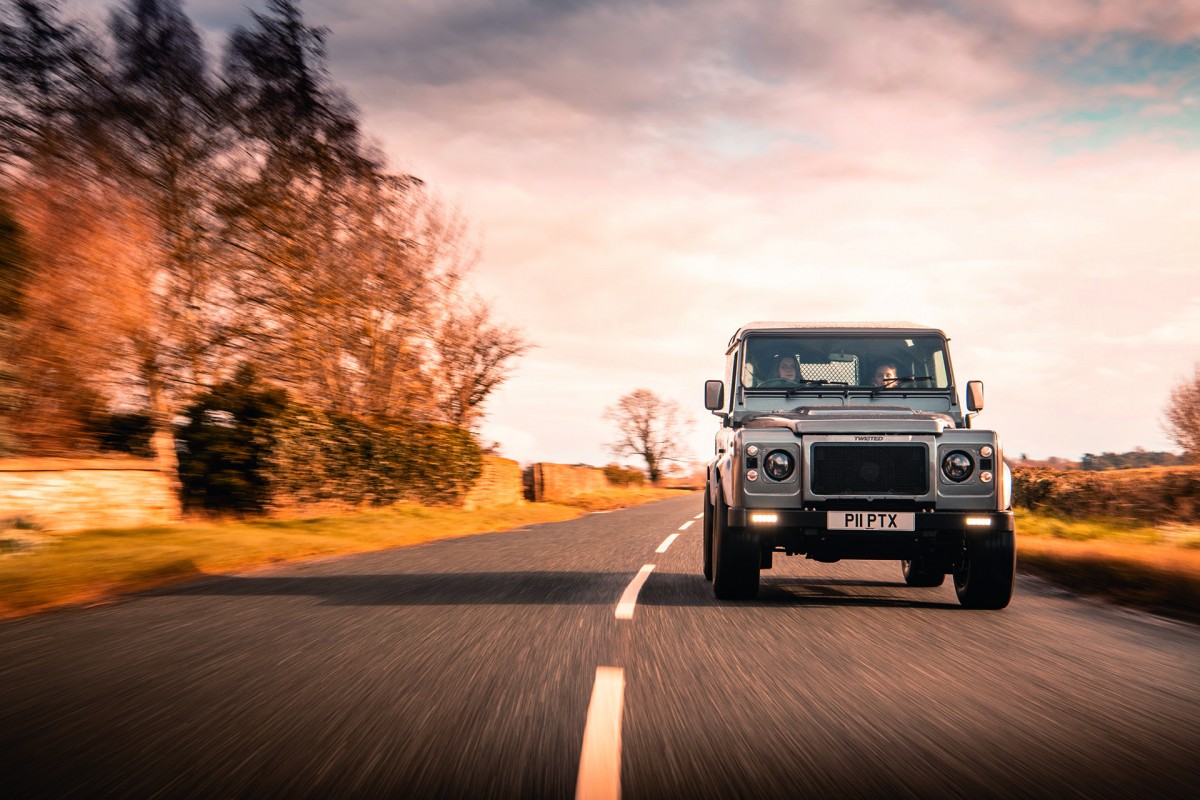 WHAT SORT OF DRIVING TASKS DO YOU USE YOUR TWISTED FOR? EVERY DAY OR JUST A WEEKEND CAR?
Mine is literally an everyday car. I will occasionally jump in one of the other cars only because it’s blocking my
Defender. But if I have a choice, I am in my Defender every day! I’ve either got one of the dogs on my knee or one of the
girls with me.

I can park it anywhere and nobody gets in my way, I can see over the hedges, it’s comfortable and I can fit all of my shopping and the dogs in the boot. It just does every job I want it to do.

I used to commute to work in my 2010 2.4l Defender! I used to bomb down the motorway with literally a minute to spare. It was an amazing car, it had over 80,000 miles on it by the time I had finished with it but it did everything I wanted!

We hear congratulations are in order! Will your Twisted be making an appearance on your big day?

WHAT’S YOUR ULTIMATE TWISTED ROAD TRIP AND WHO WOULD BE YOUR TRAVEL COMPANION FOR THE JOURNEY?
Java, named after the Land Rover colour, Java Black of course. He would be my travel companion. He just sleeps on my knee, he is the best Defender dog possible. I guess it’s because Charles brought him up in a Defender but wherever I go, he wants to go. The ultimate road trip is probably somewhere filled with dogs and cats! 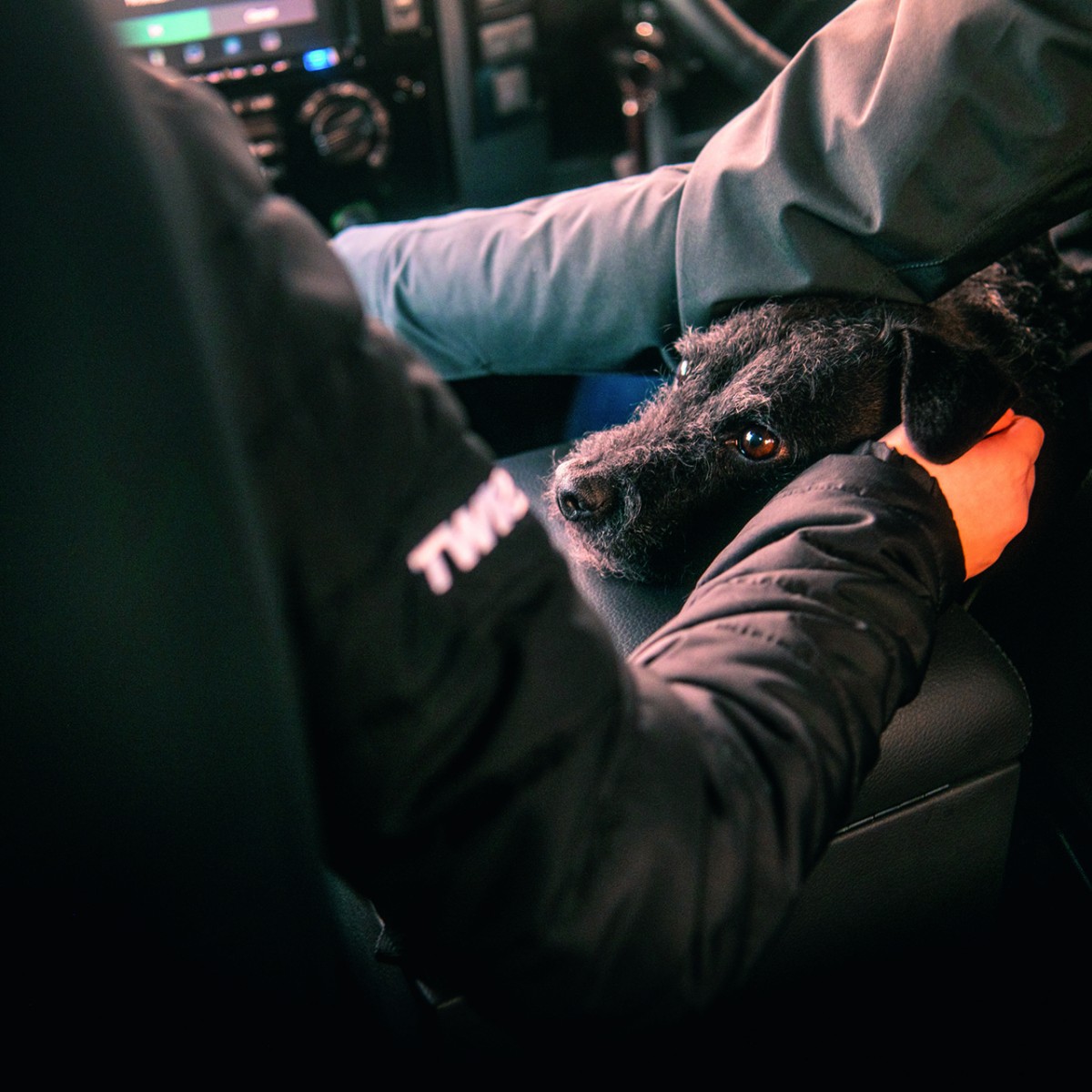 ON A SPARE SUNDAY, WHERE DO YOU TAKE YOUR TWISTED?
Quite likely it would be somewhere up in the moors or dales because we live so close. If we find ourselves at a loose end we will just put the dogs in the back and drive out for a wander.

Unfortunately, if it isn’t that, it’s probably driving to the bottle bank to do the recycling!

WE HEAR CONGRATULATIONS ARE IN ORDER! WILL YOUR TWISTED BE MAKING AN APPEARANCE ON YOUR BIG DAY?
It is highly likely there will be a Defender in attendance on our big day. We have not started planning it yet but just wait and see… watch this space!

IF BUILDING A VEHICLE FROM SCRATCH, DO YOU THINK YOU AND CHARLES WOULD AGREE ON THE SPEC, WHAT WOULD IT BE?
When Charles and I first met he had a Grey Twisted 90 Hard Top with a lightbar and winch, which is pretty much what I have now. I am however still waiting on the lightbar and winch but hopefully he will get the hint if he reads this.

He would definitely have the V8 in it now but I love the 2.2 diesel. All that said, our absolute favourite is his Bahama Gold
TD5 90. So perhaps if we didn’t have that, we would build something similar: because it is the best Defender ever!

WHAT HAS BEEN YOUR MOST ENJOYABLE TWISTED MOMENT TO DATE?
The first Yorkshire 300 was absolutely magic. I had the pleasure of driving the V8 110 for the whole of that event while Charles was in his Retro TD5.

There were 25 other Twisted customers driving in convoy! I was able to get more involved in the event and get to know the people taking part which just made it so special.

Last summer we were invited on a supercar driving experience. I ended up chasing a McClaren 570s across the Yorkshire Moors in a V8 90 which was right up there as a highlight!