A Chariot for a Champion

In November, Malcolm, Sharron and Harris Bell made the trip down to Yorkshire to collect their brand new Series IIA.

Here to pick up his Dad’s new Defender was Harris, who’s not your average 11-year-old…. In fact Harris is currently The Scottish Champion Kayaker of his age in the Lightning Category and sits a very respectable 8th in Britain! Travelling across the UK to competitions, Malcolm sees the new 110 as the Kayaking bus.We took a trip into the rainyYorkshire hills to see Harris in action…

How did you first hear about Twisted?
I was actually in a pub, in Wellington, New Zealand watching the Lions Tour in 2017 at the time, and I said to my friend (who is a Twisted owner as well) that I was looking for a Land Rover Defender. He said he had a friend that ran a company in NorthYorkshire who may be able to help.. I then started looking into what Twisted could offer.

How long have you been of a fan of the Defender and what do you like most about it?
Ever since I was a child. From the age of four or five I have fond memories of sitting in my father’s Series II. He was a plant mechanic, so he had a pick-up as his workhorse. He used to take me with him to get me out of the house as my sisters weren’t as interested. I vividly recall using the windscreen wipers manually and in the warmer summers… baking my back side on plastic seats!

“I liked the small design tweaks that had been made and just liked the fact it was just a little bit different from everything else out there.”

What changes were you most keen to make to the original Defender, as part of the Twisted build process?
Not a lot if I’m honest. I really liked the Series IIA spec that you guys had put together. I have owned a few Defenders before, including an older Twisted one. When I saw the spec I thought, if I’m going to be putting this amount of money into a Defender then one from the final batch would be the right way to do it.

Did you visit the workshop while the build process was on going and did you make any live changes?
Yes, we visited a few times coming down from Edinburgh, but I didn’t change anything as I didn’t want to throw a spanner in the works. I enjoyed coming down to see the progress throughout the build, on the way to competitions in Nottingham with Harris.

Were there any parts of your own personality that you wanted to capture as part of the build?
Having previously used these for work, I need a vehicle that would literally go anywhere. I won’t however be putting as much rubbish in the back of this one as I did my others.The practical elements of it were key, so the roof rack and ladder make it easy to transport the Kayak around. I just think it looks the part, and the loadspace in the rear gives us plenty of room for all the kit!

What is it that makes your vehicle stand out from the rest?
Simply just because it’s a Twisted. Like I said before, when I saw my friends 110, I liked the small design tweaks that had been made and just liked the fact it was just a little bit different from everything else out there. A bit like the old days of BMW. No two were the same on the road and it’s a similar idea here - you can do what you want to them. 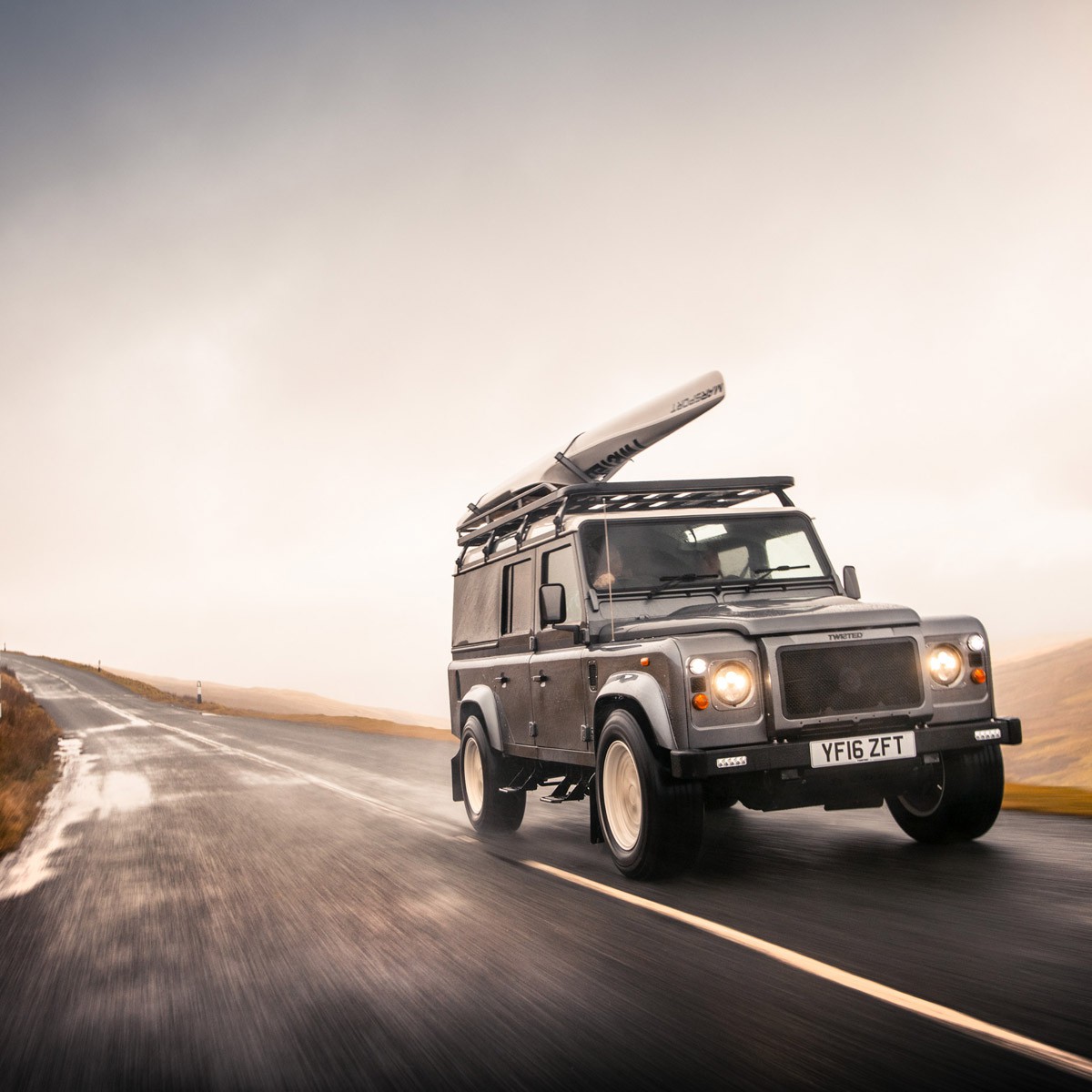 What sort of driving tasks do you use your Twisted for? Every day or just a weekend car?
Certainly an everyday vehicle for me. It’s not there to sit in a garage! It’s there to be used. It’s a workhorse, carting Kayaks up and down the country, so it’s certainly not a showpiece. It would be nice if I could have another one just to sit there though! But with work, we’ve had guys going to the Channel Islands and if I need to get there then I’ll take my 110, so there are lots of road miles ahead!

What’s your ultimate Twisted road trip and who would be your travel companion for the journey?
I’d like to go somewhere like Morocco. I’d have to take Harris as I don’t think Sharron would be too keen! (At which point Sharron agreed). We’d head out into the sand and do a safari. I think that would be a great road trip.

On a spare Sunday, where do you take your Twisted?
A typical Sunday would be taking Harrris to either Rugby or a Kayaking event (depending on the weather). We can travel anywhere across the country and down into England for both sports. Oh and Saturday is Judo, so that’s how we spend our weekends!

“It’s way better than the old one! It’s faster and the back door opens easily compared to Dad’s previous Defender.”

What does Harris think of the Defender?
“It’s way better than the old one! It’s faster and the back door opens easily compared to dad’s previous Defender”.

So what does next year hold for the champion kayaker?
Becoming Scottish champion within only 16 months of starting the sport, it’s all happened. It’s all still quite new but next year, Harris says, with the continued help of Forth Canoe Club, he hopes to get into the K1 category to challenge himself even more and of course try and move up a British ranking or two!

Featured Build: From Yorkshire to the Dominican Republic